Peterson Mark Twain Series Pipes - What better pipe to start off with than the legendary eponymous Peterson Mark Twain, especially poignant as this is the centenary year of the great man's death.( Samuel Langhorne Clemens 1835 -1910). Here is the great man, smoking a Peterson pipe,apparently the one that is on display in the MT museum is in a very poor condition.It would seem he was not very particular about cleaning,or the regular maintenace of his pipes.As can be seen in the photo link below.
You will note that the original pipe is somewhat different from the modern production pipes, in that the bowl shape was more rounded and apple shaped in the original and the stem did not have the gap at the base to take up any wear.
http://travel.webshots.com/photo/2692741690011778759SVoqqb
For years Twain's original pipe rested, un-noticed in the Mark Twain museum in Hannibal Missouri.
Well worn,with the bowl scraped thin by numerous years of use.It had obviously been one of Twain's favourite pipes.
Then in 1980 the museum received a call from Petersons of Dublin.An old photograph had been discovered of Mark Twain smoking what appeared to be a Peterson System Pipe.A close inspection of the hallmarked silver band confirmed that it was a Peterson from 1896.A complete set of photographs were taken and sent back to Peterson in Dublin.The hallmark dated the pipe at 1896,The shape for some unknown reason had been discontinued in the early 1900's.Twain the worldwide traveller had obviously heard of the remarkable smoking qualities of the Peterson system pipes on one of his trips abroad and had added this one to his collection it had clearly served him well.
Justifiably excited by the discovery,the people at Peterson decided that any pipe that had served it's famous owner so long and well should be made available to todays pipe lovers as well.Because the pipe shape had been discontinued for so long,new measurements were needed.Exact dimensions were painstakenly recorded and at the same time aged briar blocks fine enough were carefully selected.
Peterson started production of the Mark Twain Series in 1980 with a numbered production run from 1 - 400. Then again in 1981 with a numbered production run from 1 - 1000.In 1983, Peterson started producing Mark Twains without numbers,(except the 1985 limited Gold issue),until about 1989. However, they must have had another production run later as there is evidence of Mark Twains with 1998 silver marked bands. 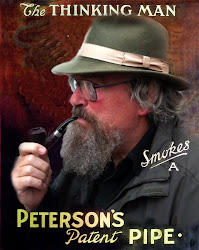